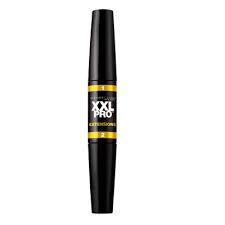 I have found a mascara that I like! OK, I know you’ve read all my rants about hating so many mascaras over the years. I said like here, not love 🙂 This means that I will repurchase if I don’t find something else or hear about a “bigger and better” mascara launch to screw me over. But, I’ve been using Maybelline XXL Pro Extension Mascara and actually really, really like it. It’s the closest thing that I have to a HG right now. It makes my lashes appear long without looking clumpy or tarantula-ish. Maybelline XXL Pro Extension is everything I wanted Maybelline The Falsies to be. I’m reviewing the regular ole’ washable formula in Very Black.

The before and after pictures above aren’t the best, especially since I’m wearing dark eye makeup in the after pics. But,  one should at least tell that my lashes are much longer and darker. I feel like I actually see results with Maybelline XXL Pro Extension Mascara. My lashes look much longer and “feathery”. This is the only mascara that I’ve used on my puny bottom lashes and felt like they actually look better. (I get clump patches on bottom lashes with other formulas meaning that I never apply mascara to my bottom lashes). There is absolutely no clumping with this mascara! My lashes feel soft and not brittle. I haven’t had any issues with smearing and flaking or smudging. My lashes are left long and pretty but without any volume added. My lashes are left so long after using Maybelline XXL Pro Extensions that they bother me when wearing my Clubmaster Ray-Bans. My lashes are long but natural looking. The formula is glossy and a nice shade of black. I’m using the “regular” formula, not waterproof. It’s easy to remove at night. I love a washable mascara that doesn’t flake. However…

The mascara doesn’t hold curll. My lashes are pretty darn flat and straight right after application. This formula won’t hold a curl. This isn’t a huge deal, but I want to inform you of this little quirk. I noticed that Maybelline has a curling formula in this line that claims to both lengthen and curl. I need to try that one! And me personally, I am not loving the 2 step process even though I know it ends in instant results. I’m lazy. And that is one of my little quirks. I feel like if I am going to spend that much time on my lashes then I should just apply false lashes. OK, that’s an exaggeration. This is quicker to apply than false lashes. Another issue is that you get a primer and a mascara, but you get less. I ran out of this stuff after 2 months of use. This isn’t bad because this forces me to buy a new tube of mascara. We all know that we are supposed to throw out mascara every 3-6. I hate throwing out a tube that I haven’t used up!

Who may like Maybelline XXL Pro Extensions? Those with thick lashes that need to add length and color. That would be the ideal person. But, this formula is also good for those with puny lashes like mine that want length and no clumps. If you care more about feathery, long lashes, then this is a mascara for you try. You like glossy black mascara. This is also a good product for travel because you carry around 1 product instead of a separate primer and mascara. This formula also doesn’t have a smell and didn’t cause any irritation to my eyes. (I have allergies and wear contacts too). If you want an easy to wash off mascara, this is good.

Who may not like Maybelline XXL Pro Extensions? Those that want VOLUME and curl. I think people that are used to very dramatic lashes may not like this. I find this formula very natural looking. I don’t think you’ll like this if you don’t want a 2-step process mascara. If you want waterproof than don’t try this. Go for the waterproof formula (but I haven’t tried it).

Until I’m brave enough to get actual lash extensions, I’ll continue to use Maybelline XXL Pro mascara. I feel there’s enough pros to keep me buying. Maybelline Pro Mascaras retail for under $10. They are available at most drugstores and drugstore.com.

Miss Whoever You Are

*Post contains affiliate links. If this product is purchased through this link then EauMG receives a commission. This keeps EauMG running. Thanks!